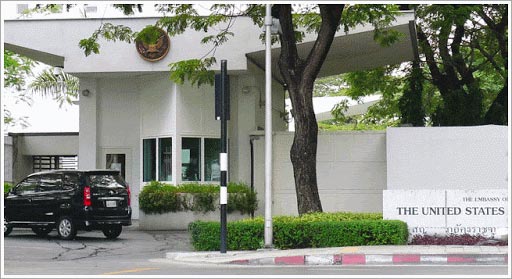 Spearheaded by Ambassador Eric John, the US Embassy in Thailand serves as a representative of the US government to the Kingdom.

Being the third-largest American embassy in the world, it offers various services not only for their citizens staying in Thailand and the rest of Southeast Asia but also for the Thai people who wish to enter the United States of America.

The primary goal of the US Embassy in Bangkok is to serve and protect the interests of US citizens staying in the Kingdom. It assures the Americans of individual freedom, human rights, and democracy, as stated by the law.

Also, it provides assistance to Americans who wish to engage in businesses inside the Kingdom. It is also in charge of the export of US agricultural and industrial products; thus promoting the economic and industrial interests of the United States.

Services for the American Citizens

In order to be more efficient, the US Embassy in Bangkok is divided into several departments:

Defense Attaché Office – Supervised by the Defense and Air Attaché, Colonel Joseph P. Curso, U.S. Air Force, this unit represents the US Secretary of Defense, Secretary of the Military Services, Joints Chief of Staff, Chiefs of the US Military Services and Commander of the Pacific Command in Thailand.

As the American Citizens Services (ACS) office provides passport assistance, it allows US citizens whose passports are about to expire to renew it and prolong their stay in Thailand. Here are the steps to follow:

1. Gather all necessary documents to support the application:

2. Should ALL of the following descriptions are applicable, the DS-82 form must be completed:

Services for the Thai Citizen

It is not for the Americans alone that the US Embassy in Thailand operates. It also assists the Thai citizens who wishes to visit or stay in the US.

The Visa Section office deals with visa applications. It helps the Thai citizens in obtaining immigration and non-immigration visas.

Further assistance could be done by the U.S. Consulate in Chiang Mai. It caters to the Americans and Thai citizens residing in the 16 north-western provinces in Thailand. It does not provide Thai visas for Americans, though. However, it notarizes documents needed for the applications in Bangkok.

American Citizen Services is done in appointment basis only. However, the office could be contacted at 081-881-1878 during emergency cases such as death, arrest or serious injury of an American citizen inside the vicinity of Northern Thailand.

The Embassy of the United States is located at 95 Wireless Road, Bangkok, Thailand 10330. Office is open from 7AM to 4 PM, Monday to Friday. It closes on official holidays. For more information, call +66-2-205-4000 or log on to http://bangkok.usembassy.gov/

You can also check the US Embassy Thailand page of Siam Legal.

The US Consulate in Chiang Mai is situated at 387 Wichayanond Road, Chiang Mai 50300. It is just across the street from the Chiang Mai Municipal Hall. It operates from Monday to Friday, 7:30 AM to 4:30 PM. Contact +66(53)10-7700 or log on to http://chiangmai.usconsulate.gov for further inquiries.